The collaboration with Taller d’Arquitectura 113 leads us once again to celebrate the recognition of a work made with all the dedication and devotion.
One more year, together with G. Giacalone, M. Viladot and E. Aran, we are pleased to announce that the remodeling of the school church of the Orden de la Compañía de María in Barcelona has been selected for the FAD 2019 Interior Design Awards.
BACK

The collaboration with Taller d’Arquitectura 113 leads us once again to celebrate the recognition of a work made with all the dedication and devotion.

One more year, together with G. Giacalone, M. Viladot and E. Aran, we are pleased to announce that the remodeling of the school church of the Orden de la Compañía de María in Barcelona has been selected for the FAD 2019 Interior Design Awards.

Regarding the updating of the celebration space, the old central presbytery, made of a wooden platform, has been demolished. This new arrangement makes it possible to occupy four of the side chapels with pews, allowing a more participative and assembly-like celebration in the form of a “T”. To reinforce this new centrality, a suspended circular canopy has been placed, traditionally linked to the metaphorical image of the “open sky”, from which hangs a processional crucifix and under which the three elements of liturgical furnishings are arranged in a triangular shape under the projection of the circle: the seat, the altar and the ambo. All these elements have the same material and compositional language that incorporate symbolic elements of Christ: the cross engraved on the surface of the altar, the fusion of the letters alpha and omega at the base of the ambo, and the symbol of the perforated chrismon on the back of the seat. The liturgical novelty lies in the arrangement of these elements in the presbytery, arranging the seat further back and on the axis of the central nave and placing the ambo and the altar on the same more advanced plane, incorporating pieces of the old altar in the form of a puzzle, giving an idea of the two parts of the Eucharistic celebration: the table of the Word and the table of the Bread and Wine.

Regarding the multiplicity of environments for pastoral work, the wooden presbytery recedes to the feet of the Most Holy, located in the center of the front wall, and is separated from the new presbytery by a mobile wooden tier accessible from both sides. This tier allows, on the one hand, to adapt the celebratory space or the new area of the Most Holy depending on the number of users and, on the other hand, to make use of it for classes, choral singing or concelebrations. The space of the old heart of the church has also been adapted by tearing down the old fixed tier to design a classroom for interiority or other activities, which is accessed through the new chancel screen that acts as a narthex and gives way to its use independently from the rest of the church, as well as allowing new visuals from the outside in its original position.

The remodeling of the church of the Lestonnac school in Barcelona responds to the desire to adapt and update the sacred space and the creation of different areas for pastoral work within the pre-existing volumetry. 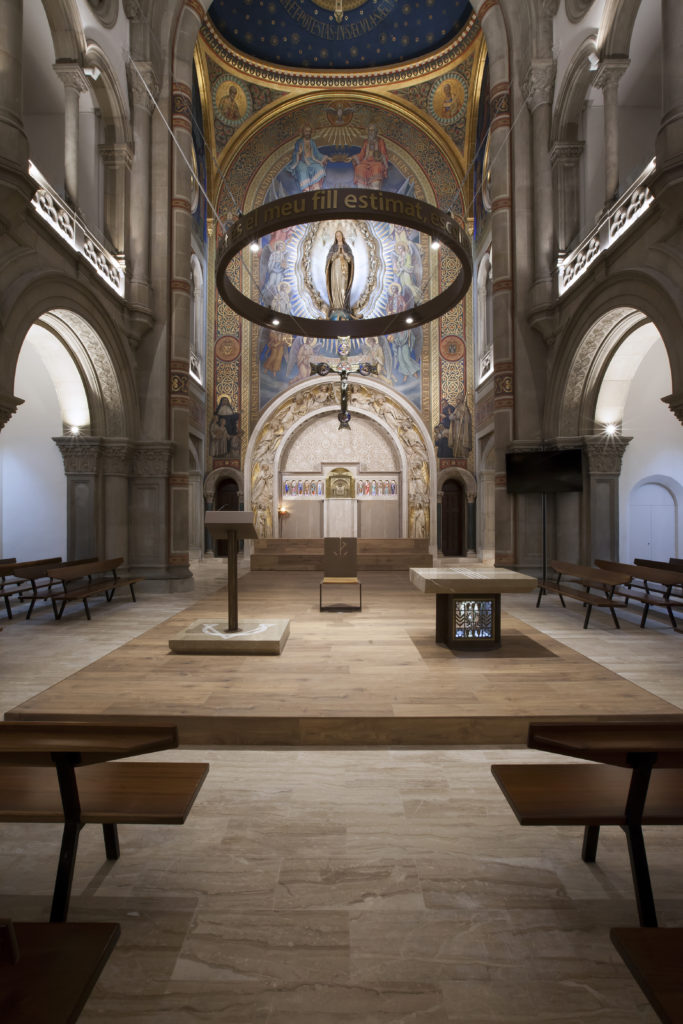 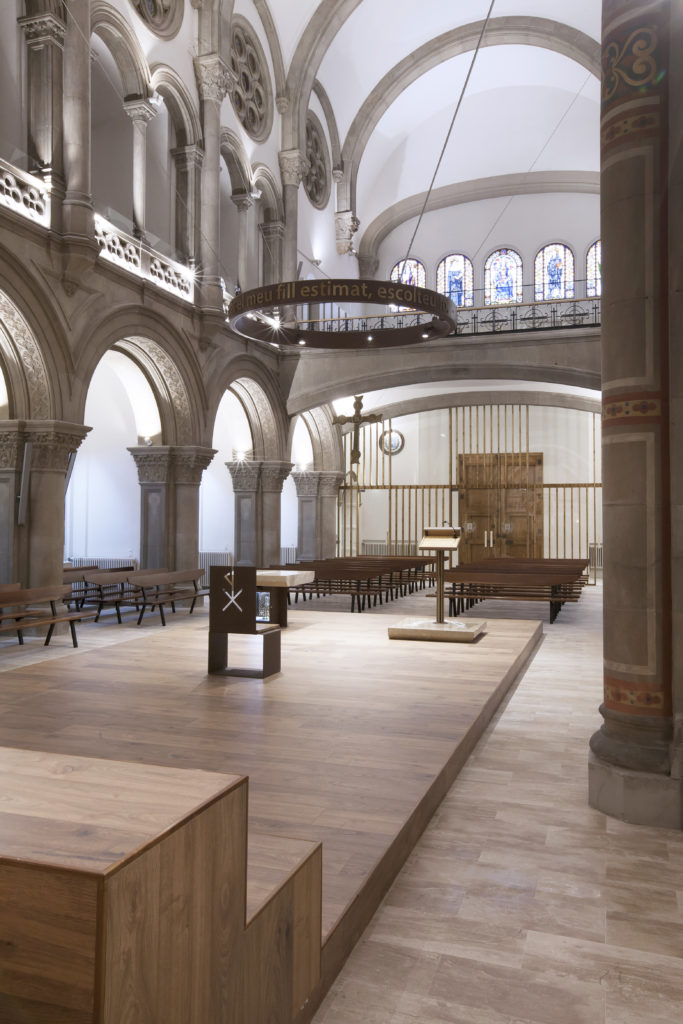 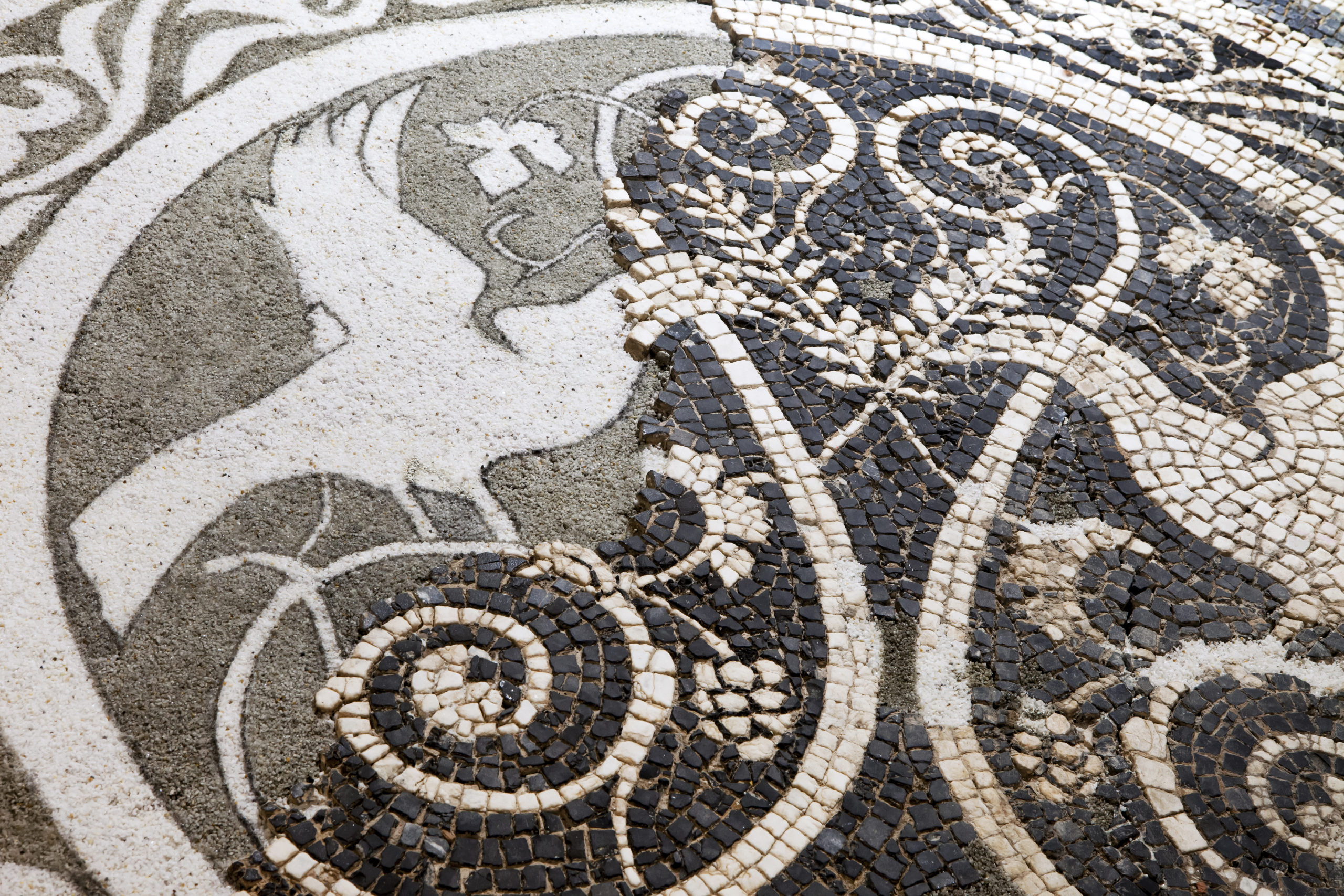 We use cookies on our website to give you the most relevant experience remembering your preferences and repeated visits. By clicking "OK All ", you accept the use of ALL cookies. However, you can visit "Cookie Settings " to provide controlled consent.
Cookie settings D'acord tot

This website uses cookies to improve your experience while browsing the website. Of these, cookies that are classified as necessary are stored in your browser, as they are essential for the operation of the basic functionalities of the website. We also use third-party cookies to help us analyze and understand how you use this website. These cookies will be stored in your browser only with your consent. You also have the option to disable these cookies. But disabling some of these cookies may affect your browsing experience.
SAVE & ACCEPT